I can’t say enough good things about this album. Def Dee and Language Arts‘ Gravity is incredibly satisfying. With heavy Jay Dilla and Golden Era influences, the sixteen tracks sound like Timbs hitting pavement in ’96. These cats have done their homework. Look for a full 206UP.COM review coming soon. For now, though, hit the link below to cop for FREE at the duo’s Bandcamp page. 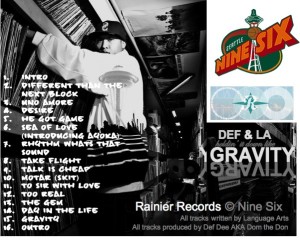 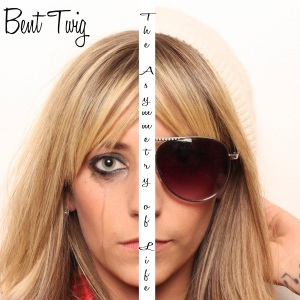 The Six’s first great summer riding soundtrack dropped last Friday with hardly a peep or tweet heard in local hip-hop’s otherwise boisterous online stomping ground. Cali-natives Soos and Preach, known together as Bent Twig, released a surprisingly capable and confident full-length debut album called The Asymmetry of Life that has thus far gone virtually undetected by the local blogs (save for yours truly and its compatriots at Seattle Show Gal). The conspicuous presence of Town players Ill Pill, Scenik, Grynch, Sol, and Geologic on the album, adds a further (and surprising) validity to this under-the-radar release.

The Asymmetry is a fifteen-track collection of laid-back, breezy, hip-hop, with funk/disco/pop sensibilities. Bent Twig (whose members grew up together on a street of the same name in Camarillo, CA) value the positive mental attitude derived from such feel-good music, which is a perfect accompaniment to backyard barbecues and cook-outs at Alki Beach. As the weather begins to transition, their debut album is just in time for such events.

Bent Twig’s rhyme topics are lighthearted and relatively narrow in scope. The party life is celebrated in an inoffensive way (“Good Music”); pursuing love and shorties is described with a PG-13 rating (“Cinderella Girl”); and motivational pep talks and commemoration of loved ones are included, too (“Can’t Go On” and “Like You”). Preach and Soos deliver their lyrics via casual conversational flow or in half-sung emcee stylings. It may all sound like cotton candy rap and, for the most part, it is. But Preach and Soos are so unrelenting in their positivity, all their good-guy talk comes across as genuine and endearing, not annoying or preachy.

Sonically, everything here is danceable and easy to listen to. Disco and funk inflections are prevalent throughout, but unlike many recent local releases with similar influences, futuristic bleeps and blips and other musical nods toward the extra-terrestrial are noticeably absent. It’s a welcome respite. Bent Twig has found a comfort within its style, fully knowing what its sound is and embracing it with satisfying results.

Currently, Preach and Soos are both attending college (the former at the University of Washington, the latter at Arizona State) which makes it all the more impressive they’ve found time to produce and release an album of such quality. On May 27, the official album release party will pop off at High Dive. The noise around Bent Twig might be relatively quiet now, but more folks are likely to get hip to this duo as word gets out, and deservedly so — they’re a worthy new addition to the Town movement.

Seattle has been waiting all year for this clip. Volvo dealerships better get your game tight. (Directed by Stephan Gray.)

State Of The Artist drops their official full-length debut, Seattlecalifragilisticextrahelladopeness this Friday, 4.23.10, at Pravda Studios. Peep the flyer below. In the meantime, click here or below to download the track, “Hey Hey” (featuring P Smoov and Shaprece Renee) from the forthcoming album.

The transformation of D. Black — the man and the hip-hop artist — was well-documented locally in 2009. The philosophical shift between his debut album, The Cause and Effect, and his most recent LP, Ali’Yah, mirrored the shift taking place in the man’s life, and it was evident to anyone paying attention to the lyrics.

Sonny Bonoho is one craaazy cat! This clip has a Spike Jonze-ish feel. It also looks like some twelve year-old’s crazy art project threw-up in a double-wide trailer. Whatever. All I know is that the world needs more Money B and MORE ASIAN RAPPERS! Word.

The dynamic hip-hop duo, Grieves and Budo, are both a throwback to an earlier era (when the one DJ/one emcee ethic was the common practice in the music), and a conspicuously new school example of the far-reaching influence of hip-hop culture.  Grieves (rhymes) and Budo (beats), are an archetypal sampling of how the culture has transcended race and class lines.

I wouldn’t personally know, because I’ve never messed with producing beats as a profession, but I can imagine being a young dude with aspirations of becoming the next DJ Premier, Just Blaze, or Jake One requires many late hours in the lab and a whole lot of hustle.

The 2009 edition of the Red Bull Big Tune featured sixteen finalists with such virtues, including two local cats, KD Cutz and Marcus D, who fully represented The Town at the Finals in Atlanta.

For the first time ever, all sixteen finalists have come together to drop a compilation album, Suite Sixteen, featuring one track from each competitor. This is a great look for these new jacks and a shining example of how much talent remains relatively undiscovered. Cop it for FREE here, or click on the album cover below.

The Code Red EP is available for FREE download. Click here or the album covers below for the link. 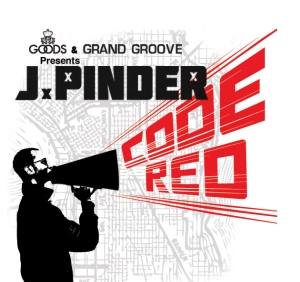 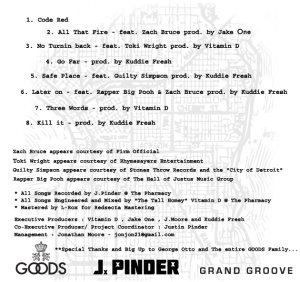 The Code Red EP should probably be considered J. Pinder’s first official entry into the local rap game. The previously released Backpack Wax Mixtape served to introduce folks to the South End rhymer, and it was an unarguably excellent collection of scatter-shot beats and bars. Ultimately, however, it was exactly what it says it was: a mixtape; and thus lacked a coherence that effectively established J. Pinder’s particular identity. The Code Red EP achieves this with a self-assured nonchalance perfectly befitting this emcee.

The first thing you’ll notice is the production and guest shot lineups. Code Red is full of heavy-hitters like Jake One, Vitamin D, and Kuddie Fresh on beats, and established rappers Big Pooh and Guilty Simpson on feature bars. Because of the serious industry weight behind this brief eight-track collection, it sparkles with a certain professionally-applied sheen that we haven’t seen the likes of on any 2010 local releases.

This isn’t to say Code Red is all style and no substance. Quite the contrary. J. Pinder’s subject matter is categorically street-oriented, but ultimately trends toward that most complex of emotions dealt with by people from all walks of life: l-o-v-e. This album is really all about love. Love for your community, love for hip-hop music, love of self, love for your chick, love for your family, etc. There’s even a song about how dangerous and frightening it is to say, “I love you” (“Three Words”). A lack of love is generally the fundamental cause of society’s woes and J. Pinder understands that condition. Code Red is remarkable because the message is delivered in a grown-ass way, never preachy or holier-than-thou, just through observation and down-to-earth real talk.

If there is one knock on J. Pinder, it might be his rhyme style. While he has a knack for never wasting a word, the dude is so unassuming in his flow that he veers dangerously close to sounding indifferent. Not surprisingly, the best tracks on the album are those where he increases emotional effusion. “No Turnin Back” is a track so heavy and thick, it sounds like Vitamin D built it with bricks, concrete and asphalt. It’s about the dangers of losing positive focus when surrounded by so much negativity and J. Pinder gives a great vocal performance. A couple listens are required to appreciate how subtly he shifts from his normal casual breeziness to sounding downright icy. That he’s capable of carrying a track with so much audible weight is a great sign for his future.

Free EP’s are often crafted with the intention of building momentum for a full-length album. Occasionally they also succeed in standing alone on their own merits, as fully-realized collections of songs representing a concept or a brief statement of the artist’s general philosophy. Code Red is similar to The Physics’ 2009 High Society, two extended players that achieved multiple artistic objectives with relative ease. J. Pinder has deftly built an album good enough to capture listeners’ ears today and convincing enough that he’s worthy of following tomorrow.