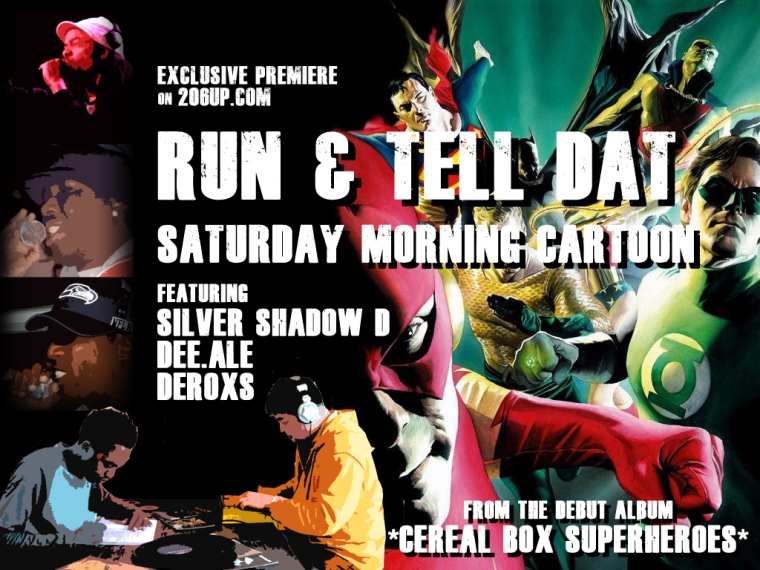 Blending new and classic styles, this posse cut connects dots between Northwest hip-hop artists Jonnie Storm and Nitro Fresh of SMC and the venerable flows of veteran MC’s Silver Shadow D, Dee.aLe and DeRoxs. As Nitro himself tells it:

Silver Shadow D, Dee.aLe (DMS) and DeRoxs (Wolfpakk) are like brothers.  As you can hear lyrics by Silv, they have been knowing each other for nearly 20 years.  But, according to Silv, this song is actually the first song he had ever recorded with Dee.aLe.  Jonnie had known these guys when he used to be known as Jon Doe, at the freestyle ciphers, shows, etc.  I, personally, got a chance to first meet Silver Shadow D and Dee.aLe at RC tha Trackaholiq’s CD release party.  I was mesmerized by their energy on stage, and immediately decided to work with them.  I met DeRoxs about 2 years ago, at the show.  I gave him my beat CD, and about a year later he contacted me, saying he wanted to work with me for his upcoming album.  Now, his upcoming album “Checkmate” is due June/July 2011, produced by myself, Silver Shadow D, and few others.  It was truly my pleasure to have all these veteran MCs on one of my tracks.

Catch Saturday Morning Cartoon at the Arts In Fusion show at Rendezvous this Friday (5.27.11) at 9:30 pm. Click the flyer below for more details and download the track below. 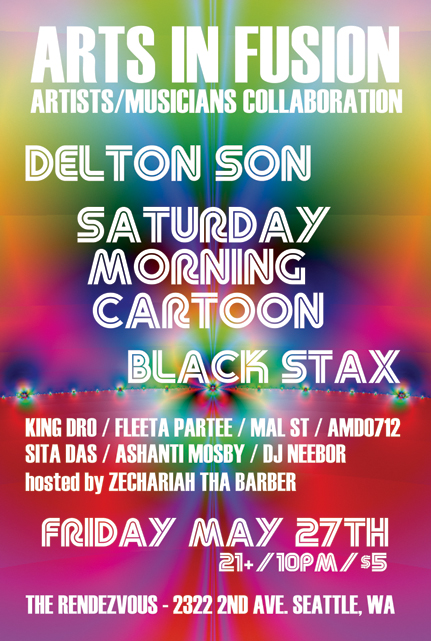 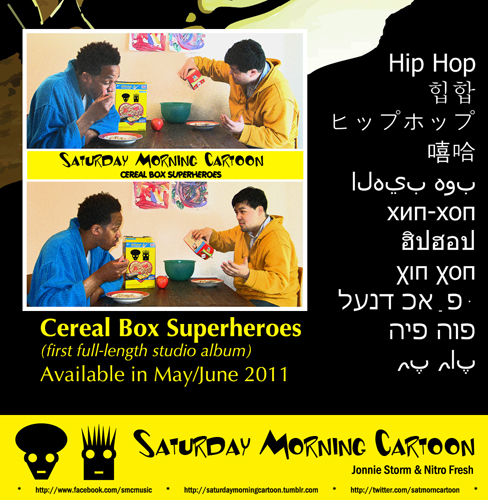 From the playful hip-hop minds of Jonnie Storm and Nitro Fresh, the dudes who comprise Saturday Morning Cartoon, comes Cereal Box Superheroes, the crew’s debut album. Beginning today, SMC will leak one (or two) tracks per day for FREE. Each drop will only be available for 24 hours, so stay up on the group’s Bandcamp page (linked below) daily to make sure you get the whole album.

An upbeat and positive vibe is SMC’s general hustle, along with healthy use of the talk-box, which adds a nostalgic old-school futurism to the group’s sound. Get hip to SMC below.

Peep the video for “Something Brand Nu” by Saturday Morning Cartoon featuring Julie C, animated and directed by David Toledo. SMC is Nitro Fresh (beats) and Jonnie Storm (rhymes). Their vibe is on some chilled-out, schoolyard whimsical sh-t. 206UP.COM appreciates that. Check for the crew’s FREE mixtape, ABC’s and 123’s, here. And keep an eye out for their debut album, Cereal Box Superheroes coming sometime in the Spring.