We’re a little late with posting this video from Federal Way’s Q Dot, but “Black Gold” as a song and message is timeless in any capacity. From the rapper/producer’s EP of the same name. 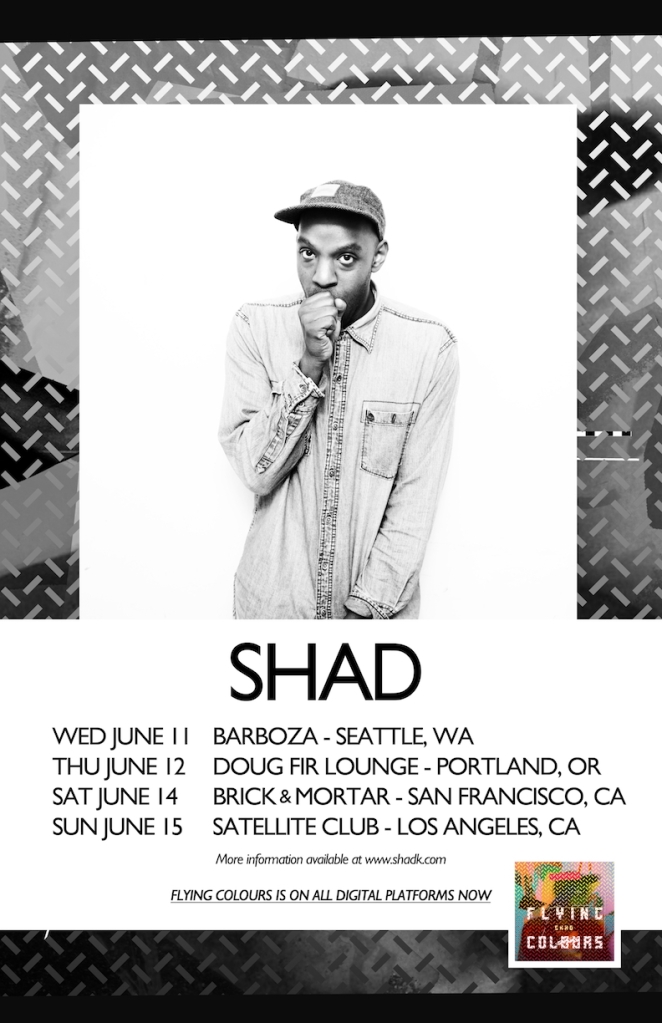 Shad is huge in Canada. Bigger — in 2010 apparently — than even Drake, when the London, Ontario MC beat out the T-Dot’s favorite son for one of Canadian music’s coveted Juno awards. (My wife, who is Canadian, would not like that I used the ridiculous abbreviated version of her hometown’s name, but she is not here right now and I’m pretending to not know any better.) Shad’s latest album, 2013’s Flying Colours, was similarly well-received in our neighbor to the north and now the self-deprecating, socially-minded rapper is beginning to find buzz in the States.

You’re in luck, Seattle, because Shad is coming to Barboza this Wednesday* (6/11/14), and 206UP is pleased to be offering a pair of tickets to one lucky reader. Here’s how to enter: Send an email or tweet to 206upblog@gmail.com or @206upBlog with the phrase “SHAD >>> DRAKE AND EVERYONE KNOWS IT!” somewhere in the body of the message; OR simply fill out the form below. We’ll pick one name at random this Tuesday and inform the winner by email. Reminder: Just because the legal drinking age in Canada is 18 doesn’t mean this show is for you — sorry, kids, 21 and over only.

South Sound MC/producer Q Dot makes a grand regional statement on “State of the Union,” the opening track on his new LP, Declaration of Dopeness. You might remember the song, which was released way back in January 2011, as a call-to-arms of sorts for hip-hop artists in the Pacific Northwest. As Q tells it, the machinations of industry politics occurring even here (albeit on a relatively microscopic scale) prevent the region from garnering greater success on a national level.

I’m not sure if Q is suggesting the abandonment of Seattle-Tacoma hip-hop’s competitive ethos altogether, or if he’s just encouraging more artists to get out and represent their national/global brand. However he meant it, it’s a nice sentiment. I just wish he’d offered more concrete ways of elevating the region’s game. For example, a show-and-prove in the form of some high level local collaborations would have been welcome, a move which would also have made for a greater listening experience on the whole.

On songs like “State of the Union” and the title track, Q settles into a relaxed conversational flow and consequently connects with resolute statements. Unfortunately missteps elsewhere drag Declaration into painfully derivative territory, as on the swag rap snoozer “I’m On,” the inane club joint “Groupie Girls,” and the requisite soul-infused love jam “Ijuswannaluvya 2.0.” The expertly touched pop sway of “There She Go” shows why Q Dot was Grammy-nominated and the lean piano ballad “Indivisible 2.0” brims with confidence and individuality and ends the album on good terms. It’s too little too late though, as the majority of Declaration of Dopeness succumbs to formulaic type.