206UP has partnered with The Brand Kings to bring you EMP Museum’s Black History Month kick-off event: Through the Eyes of Art featuring The Value of Black Life art showcase, on Saturday, February 7, 2015. Talib Kweli and Seattle’s own Draze are the featured performers.

Enter to win a pair of tickets courtesy of 206UP!

Thanks for entering and we’ll see you there! 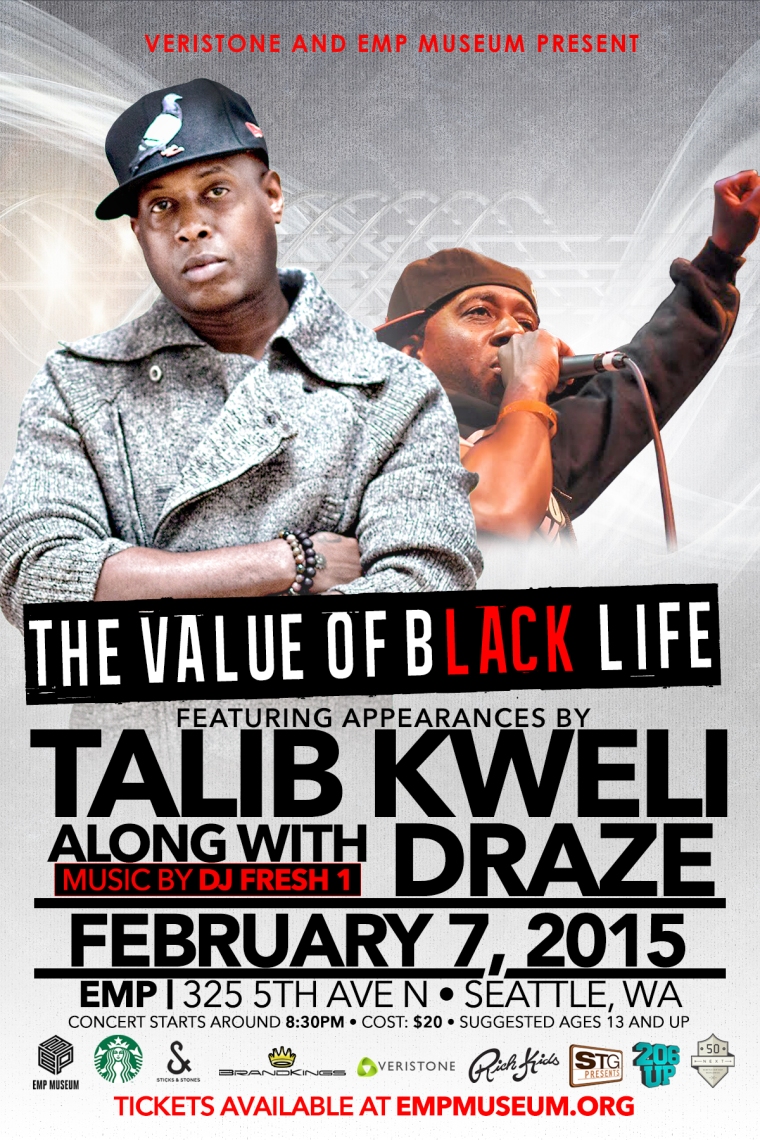 The Brandkings and EMP Museum present Through the Eyes of Art, the kickoff event for EMP’s Black History Month celebration.

The second annual Through the Eyes of Art will feature a keynote address from the former National Director of Youth Engagement at World Vision Derrick Wheeler-Smith, remarks from City of Seattle Mayor Ed Murray and Seattle City Council Member Bruce Harrell, and a live performance by hip-hop heavyweights Talib Kweli and Draze.

206UP is a proud marketing sponsor of the EMP Museum’s Black History Month kickoff event: Through the Eyes of Art featuring The Value of Black Life artist showcase with appearances by Talib Kweli and Seattle hip-hop artist Draze. It’s going down on Saturday, February 7, 2015 and tickets can be purchased here. More details below via the EMP website.

The Brandkings and EMP Museum present Through the Eyes of Art, the kickoff event for EMP’s Black History Month celebration.

The second annual Through the Eyes of Art will feature a keynote address from the former National Director of Youth Engagement at World Vision Derrick Wheeler-Smith, remarks from City of Seattle Mayor Ed Murray and Seattle City Council Member Bruce Harrell, and a live performance by hip-hop heavyweights Talib Kweli and Draze.

206UP would like to extend a special thanks to Draze and The Brand Kings for bringing us on board!

Geo sounds right at home trading bars with KRS-One, Talib Kweli, and Buckshot on the track “Oh Really (Remix)” (click on the pic below for the DL link).

And why shouldn’t he? He’s probably the best rapper in the 206, and a track featuring those heavyweights deserves our very best.

Which reminds me, why doesn’t the Who’s The Best Rapper debate come up more often on the blogs? I’ll start it: Geologic, of Blue Scholars, is the BEST EMCEE IN SEATTLE. I know I’m not breaking any new ground with that statement, but we should at least be having the argument. Shouldn’t we? Who else is in the Top Five?

Some of you had probably already gleaned that from previous blog posts (like the one with a fuzzy camera phone photo of Jay-Z, taken near a subway stop that I frequently use), and some of you know from our interactions on Twitter or email. The fact that I live approximately 2,600 miles away from the 206 puts me at a major disadvantage when it comes to getting a proper and accurate feel for all of this recent Town movement. I miss all of the shows. I never get to interact with any of the artists in person. I have a hard time copping the latest releases — sometimes I practically have to beg rappers to send me their new sh*t. (Which reminds me: I owe a huge THANK YOU to all of those folks who’ve provided me with music. You will never know how much I appreciate it. And by the way, keep it coming please!)

On the other hand, living in NY does give me an interesting perspective when it comes to how Seattle’s hip-hop community compares to other cities. For example, not surprisingly the hip-hop scene in New York is incredibly vast and wide. You can’t even begin to absorb all of it, especially if your desire is to actually feel it. (Okay, I’m speaking for myself. I’m a true fan of the music, but I’m like most normal folks, my nine-to-five is not associated with hip-hop and the time I spend listening to music is in constant competition with the time I want to spend reading a book, or going to the movies, or a museum, or doing one of the millions of things there are to do in this city.) A hip-hop head in New York really has to pick and choose what specific artists and styles to pay attention to. It’s intimidating and, to be honest, I’ve mostly ignored it. I’m too busy with Seattle sh*t. There’s enough going on in our humble little town to satisfy the most carnivorous of listeners. Plus it keeps me connected to the city where my heart truly lies.

The irony of all this is that when I’m out visiting family and friends in the Northwest — as I was last week — those are the moments when I’m paying the least amount of attention to hip-hop. Time is so scarce during those short visits. Aside from having it on constant rotation on my iPod (as is the case no matter where my feet touch the ground), I didn’t have time to catch any shows and, as you probably noticed, didn’t write even a single post during the seven days I was in town. It’s kinda messed up, really. And so, I think the universe was trying to tell me something when it just so happened that, on Tuesday, I ended up on the same airporter shuttle bus from the Anacortes ferry terminal to Seatac, with none other than the homie Vitamin D who, like me, was also heading back to The Six after a weekend in the San Juan Islands. (Vita: I shoulda hollered at you, dude! Next time, I promise!) Now this may sound particularly corny, but it meant a lot to me for two reasons: (1) Vita is one of the true OGs of Seattle hip-hop. He’s been a trendsetter, a waymaker, and any other appropriately hyperbolic adjective one can find to describe his influence on rap and r&b in the 206. He deserves the props and anyone who knows anything about Town music would agree. Which is why (2) I found it particularly dope that he had been spending time in the San Juans, the place where I grew up, came of age, and, through interesting twists of musical fate, came to love hip-hop music. (See, I told you I was gonna get corny! Whatever, I could give a f*ck what you think, ha!)

Running into Vita in a seemingly totally random place like that brought me back around to what I think is the greatest thing about the current movement in Seattle. It’s so small. Tight-knit. Intimate, even. A real community. I’ve said before that Seattle is a great place to be a rapper these days because it’s one of the least-marginalized hip-hop communities in the country. From the constant collaborations, diversity of acts at the shows, to the online Twitter chatter (it’s like a virtual fraternity house). I’m sure that beef exists (Geo: “In a town not big enough for egos to breathe…Twisted, crab-in-a-barrel existence…”), but for the most part, it seems to be all L.O.V.E.

New York is the birthplace and eternal capital city of hip-hop. Have you ever paid attention to the little monologue Spaceman gives on the joint with J. Pinder (“SXSW/CMJ”) where he talks about how overwhelming it was to be an up-and-coming rapper from the 206, standing in the famous club, SOB’s, during CMJ? That’s how culturally ingrained hip-hop is in New York. It’s one of the city’s many touchstones. An institution. A feeling, even. There’s no other city where you can go see The Roots perform every f*cking Tuesday night! Or go to a random free screening of an independently-produced hip-hop documentary at Columbia University and end up standing at a urinal next to Talib Kweli (that sh*t happened to me!). I saw motherf*cking Jay-Z shooting a clip for “Empire State of Mind,” guerrilla-style, on my way to the subway! Through pure chance, I even ended up working at a non-profit organization that helped landmark 1520 Sedgwick Avenue in the South Bronx as “The Birthplace of Hip-Hop” (see here and here). Hip-hop is the musical heartbeat of daily life in NY, and from a cultural standpoint, it will never be matched. But Seattle, man. DAMN. Our movement is young. Fresh. As optimistic as a box of baby rabbits. We still don’t know how high these artists will fly. Keep doin’ your thing. I’m looking forward to the day I come back and get to participate on an even deeper level.

I only have a few minutes before I gotta pack for my triumphant return to the Sea, which is happening in t-minus 9 hours…8…7…6…

But I wanted to just briefly pass along two of my favorite pieces of hip-hop media. They don’t relate specifically to the 206 scene, but the last time I checked, hip-hop was happening in every damn nook and cranny of our fair nation. (Sometimes I even need to escape our little insular 206 world!) That being said, peep game:

The first thing you need to check for on the regular is Ill Doctrine, Jay Smooth’s online hip-hop/politico/pop-culture op-ed series. Smooth is proof that there’s a hip-hop nerd hiding inside all of us. Ill Doctrine is kinda like The Source. If The Source grew a brain, a conscience, and a soul. (Oh, snap!!) It always seems like Jay says what I want to say, but in much more eloquent and creative ways. Here’s his latest post, on the Budden vs. Raekwon beef:

The second worthwhile item is the film Hip-Hop: Beyond Beats and Rhymes, a documentary by filmmaker Byron Hurt. Here’s a preview:

It’s a film that tackles themes of masculinity, homophobia, and sexism in hip-hop music. It’s easily one of the most important music documentaries ever made. Byron Hurt really turns hip-hop upside down and shakes all of its ugly parts onto the table so they can be explored carefully. Don’t miss it.

(Quick story about this film: I first saw it at a free screening at Columbia University. The main reason I went is because I heard Talib Kweli would be participating on a discussion panel after the screening — along with Mr. Hurt and a host of other hip-hop intelligentsia. Kweli was his normal thoughtful and engaging self, but the real star of the screening was Byron Hurt and his film. I came away impressed and with a disturbed perspective on how a lot of rappers end up marginalizing themselves by the lyrics they spit. I also had my first celebrity encounter in New York when I ended up standing at a urinal next to Talib Kweli. I resisted the urge to challenge him to a freestyle battle.)

While we’re on the subject of shows, another one you probably shouldn’t miss is this year’s incarnation of the now seminal Rock the Bells tour (Friday, 8/14, The Showbox at the Market).

And, while the Seattle lineup is certainly nothing to sniff at, you’ll notice some glaring ommissions from the roster appearing at larger venues across the nation. Namely, Nas, The Roots, Common, Ice Cube, EPMD, and, uhh well, the list goes on…

So this year’s version of RTB is not only big-time scaled-back from last year (when it was at The Gorge), but Seattle is receiving an even further stripped-down version than say New York, Chicago, and Los Angeles, which, due to our market size, stands to reason.

Oh well, should be a good show, anyway. The lone local act is Khingz, one of our most important artists doing it big around the 206. I’m still getting down on From Slaveships to Spaceships (it’s hella deep), and hope to pass along my thoughts soon.