Two weeks ago it was Dr. Cornel West, tonight it was The RZA. Barnes and Noble in Union Square, Manhattan got their sh*t on lock!

The RZA just released his book, The Tao of Wu, an enlightening memoir which is one part autobiography, one part spiritual guidebook. It’s relatively short (I read like a third of it just while I was sitting waiting for RZA to get there). It’s well-written and should be thoroughly engaging to both hip-hop fans and those interested in bettering themselves (and the world) through spiritual channels. I really mean it: it’s that illuminative and honest a work. 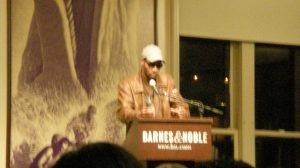 During the short time he was on stage, RZA spoke eloquently and earnestly about his difficult past and how those experiences, career successes, and ongoing spiritual journey have informed his life thus far. He maneuvered easily and with obvious knowledge between Christianity, Islam, Buddhism, Taoism, the entertainment industry, and, of course, martial arts movies. He’s truly a renaissance man for the hip-hop generation; a philosopher and truth-seeker borne out of the hardest housing projects in NYC. Yet, for me, he’s oddly relatable. Probably because, at his core, he’s just a huge nerd who likes to read books about sh*t. It’s strangely edifying to learn that one of your favorite hardcore rappers is just a sentimental book jockey like yourself.