Shelton Harris and Tyler Dopps are going for a big sound to match their similarly sized aspirations. The title, “Glory,” basically says it all here.

Rapper Shelton Harris and his production partner Tyler Dopps made names for themselves on the strength of their 2013 five song EP The Fresh Start, a collection of glimmering, accomplished pop-rap anthems that belied the young ages of its creators. Dopps has a knack for looping addictive melodies over clean boom-bap and Harris is an efficient MC who rarely wastes a word, making beelines to raps-about-raps and the subject of being young and hungry while trying to come up in “the game.”

Their full-length debut album Lights — originally due last summer — is seeing its finishing touches added while a young and eager Seattle fan base, weaned on Macklemore and little else, awaits. Shelton and Tyler seem to be carrying the proverbial banner for a new local wave of positive, self-reflective hip-hop borne from the confessionals of Aubrey Drake Graham and the all-inclusiveness of Ben Haggerty.

Shelton’s popularity is an exciting new development that runs counter to the early aught backpack leanings of Seattle hip-hop artists (now entering their mid-30s and beyond) who helped nurture a devoted underground following. Shelton’s brand is also an alternative to the cloaked, substance-driven art-rap of movements like Thraxxhouse and Underworld Dust Funk, crews of a similar generation but whose points-of-view reflect a sort of updated streetwise version of Seattle’s grunge ethos of the early ’90s.

All of this adds up to a more balanced range of hip-hop in Seattle, a sign that the local scene is becoming even more of a microcosmic version of the greater hip-hop landscape in general — it takes all types, we say. Shelton Harris took time to hop on this week’s edition of THE SIX. Hit the jump for more.

Shelton Harris and Tyler Dopps are preparing to release their debut album Lights, and “If I Fall” is the latest one-off from the MC/producer duo. Sam Lachow hops on to offer some insight into the creative process and the pitfalls of risking it all for the art you believe in. This is polished, well-crafted pop-rap and for that reason my cautiously optimistic ass remains, well, cautiously optimistic about what Shelton and Tyler might bring to the proverbial rap table. As the Seattle hip-hop super-continent continues to separate itself from one conglomerate mass into different subsets, acts like SH and TD seem poised to lead the charge for a younger, contemporary fan base whose listening tendencies trend toward the more accessible side of things. 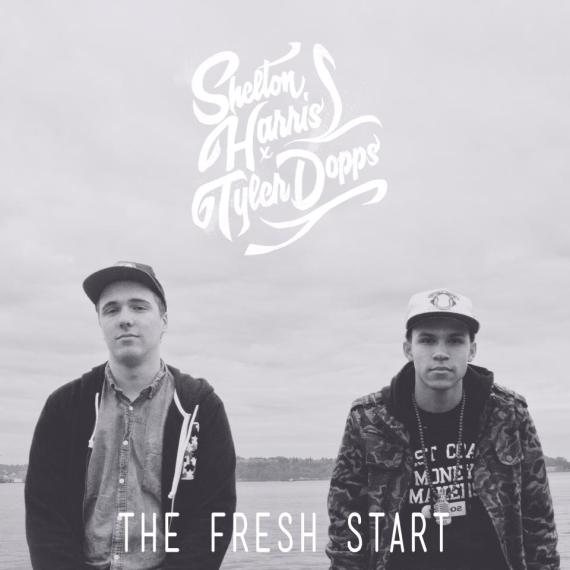 Shelton Harris’ 15 minutes have officially begun. He played the lead role in Macklemore and Ryan Lewis’ video for “Same Love”; XXL recently named him one of Seattle’s “15 hip hop artists you should know”; and the budding MC landed himself on the bill for the much vaunted Sasquatch festival last month. Not bad for a dude barely out of his teens.

206UP finally took time out to spin through The Fresh Start, a six song EP with producer Tyler Dopps. The release definitely feels like an appetizer for what could be a satisfying main course. The Macklemore influences are apparent which comes with certain drawbacks: Much of TFS suffers from a saccharine sweetness that would wear thin if drawn out over an LP’s length.

But Shelton has a confident, pure flow reminiscent of fellow Town rappers Sol and Grynch. Tyler’s production trends toward the buoyant, pop end of the spectrum and it feels right paired with Shelton’s unassailable positivity. While he isn’t as immediately thrilling as some of Seattle’s other young new guard (Dave B, Raz, Porter Ray, et al), the potential is all there for a breakout star in the making.