Okay, so, funny story: one of the songs in last week’s edition of The TrackMeet featured a local R&B singer named Stefano Langone. Turns out, Langone is a current contestant in another music competition that you might be familiar with: a little thing called American Idol. The track, “Summer, Winter, Spring, Fall,” by the emcee P. Smith, was the runaway winner of The TrackMeet (like, it wasn’t even close). Apparently a few folks (fellow contestants included) weren’t very happy about what they perceived as an advantage. Make that, huuuuge advantage.

Whatever. I didn’t know. I don’t watch American Idol. So f-ck off it’s not my fault. (J/K [kinda]). Admittedly it does suck that the disparity in voting may have had something to do with Langone’s guest-shot on the track, rather than the pure emcee skills of P. Smith, which is how The TrackMeet is supposed to go down. But what’s done is done. Let’s just move on, shall we? (As an aside: I hear Mr. Langone posted the link to last week’s TrackMeet somewhere, so much thanks to him for doing that. And if you want more “P. Smith featuring Stefano Langone,” here is the link to the emcee’s Bandcamp page. Langone is all over it, so enjoy.)

Now to this week: I can safely say there are no current American Idol contestants who perform on any of the three tracks below. With that, I trust you will all act accordingly. (Voting lasts for one week as always. Tell a friend, dummy.) 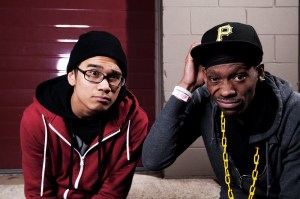