I went to the Twista show excited to take a stroll down memory lane. When I think of the legends of hip-hop he might not be one of the first people to come to mind, but once he ran through his catalog I realized this was a mistake. As I watched one of Chi-town’s finest emerge on the Crocodile’s stage with the most impressive jewelry I have seen up close (paling only in comparison to Slick Rick’s) I happily rapped my way into nostalgia.

The room was packed with dedicated fans. Twista opened his set with the title track off his latest album, Dark Horse, but the real strength of his show was in the older material. What impressed me most about Twista is the amount of hits he’s had and how fun all those songs are to hear live. As soon as the beat dropped from “Is That Your Chick,” and he began to rhyme at a pace that no one has been able to rival, I was amazed. Even though everyone knows that Twista is defined by his ability to rap faster than anyone else, seeing that kind of skill, mastery of language, power, energy, and simultaneous calm on stage all at once is impressive.

His long list of hits is proof that Twista contributed much to the rap landscape in terms of style, tempo and subject matter. The coolest thing about seeing Twista perform live is that the show felt like an education, not just in hip-hop history, but in sheer rap artistry. I can’t think of many rappers that are as versatile as Twista and have as much raw rhyming ability — his talent is remarkable and he manages to offer something for everyone. No matter the subject, he delivers it with quality production and smooth lyrics that are more clever than people realize. And of course he’ll rap circles around your average MC.

Twista performed a remix of David Banner’s “Like A Pimp,” which was another highlight of the show and had the crowd mesmerized, but he also played the majority of his new album, only contributing live ad-libs while the vocal tracks played. I could have lived without this last part of the show. While Dark Horse has some good songs, it was clear the crowd wanted classic Twista and they had a blast when he stayed in that realm. He started losing people with the newer material — myself included — but props to him for taking time to connect with his fans, shaking people’s hands and taking selfies from the stage.

The “oldie but goodie” approach is best for rappers like Twista who has given hip-hop fans so much to reminisce about happily for years to come. He has left his mark on the rap game, leaving a solid footprint in a fickle music world where many less talented, boisterous personalities seem easily forgotten. When people look back on its history, I hope no one thinks of Twista as some sort of rap underdog, because they would be wrong. 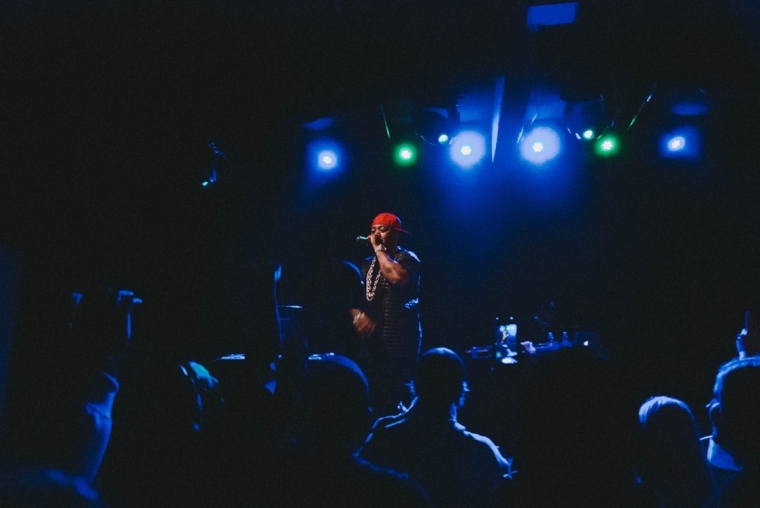 206UP contributor Emery Desper sat down with Twista backstage at the Crocodile after his set.

Emery Desper (ED): Your new album, Dark Horse, has a different sound than your older stuff, can you talk about the direction of the album?

Twista (T): [The album’s first song] “The Dark Horse” has similar sounds, but was produced by Traxster. At the same time I wanted to let people hear what Twista sounds like with a more current sound so I have more than one producer [on the album] to elevate the sounds a little bit as well as give you what you’re used to. So that’s what you hear now.

ED: Does your darker sound have anything to do with what’s going on with the social climate of Chicago, where you’re from?

T: Nah, it terms of “dark,” thats just the way that Traxster does his beats, like from the Adrenaline Rush days. And as far as me titling the album the Dark Horse, that’s just a word used for the person that’s least expected to win in something. Besides that, it’s just that hard vibe. When I say something is “dark,” I’m just talking about that hard-ass 808, grimey, dark-ass Traxster vibe.

ED: So I’ve heard you say a couple times that rappers need to be more involved in their communities. How does that inspire you or relate to your music, if at all?

T: It does; it makes me pay more attention to the songs I make and the lyrics I do. Not every song, because I think music is entertainment, and sometimes people should have enough common sense to know that you don’t mean no harm when you say whatever you’re saying. But at the same time, I think that it creates a balance when you’re conscious about what’s going on and knowing that in today’s society, with social media and the internet, that people are paying more attention so you should do something to help sometimes.

ED: Obviously your wordplay is incredible and it’s your signature. Do you feel like you have a signature sound outside of the way that you rap?

T: I feel like the signature sound is people knowing that I rap fast. But I can [rap] pretty much how I want to. I just feel like that’s [what] people mostly know me for and [what] is accepted the most.

ED: Do you feel like you’re in a box because of that?

T: Yup. I slow that shit down and I be saying some cold shit. Like I know that shit is cold! And they be like, Man, we don’t wanna hear that shit, we wanna hear you spit that fast shit. So you know, I accepted it. So I just give it to them.

ED: So you always have like soul love ballads mixed in with your raps. Can you talk about why you do that?

T: I think just working with certain producers and just having that slow vibe. It came a lot from the “Po Pimp” vibe. That was a song [where] I came with emotions, it was just one signature sound. Every time I make an album I capture that vibe.

ED: I think women relate to a lot of your songs. Can you speak about that?

T: Yeah you have to cater to the women. I paid attention to that before, but once Tupac said it, man, rap for the women and then guys are going to follow along. You gotta make sure you’re doing songs for the women.

T: I mean you have songs that cater [to women] but, but you don’t have [many] rap artists that know how to do it the right way. So you know I definitely feel like I helped to pioneer that type of vibe a little bit.

ED: I do too because it’s really popular with certain artists, but watching you perform I realized that you might not get your due credit for that.

T: Yeah I get it in. I could talk some shit you know but, I mean, I’m a humble guy. I could say that this person stole my style or stole my song, but I’m confident in my skin so I just let them do what they do and I do what I do.

ED: How has working with other artists influenced you?

T: I always want to impress them, so a lot of times when I do a feature with another artist or something like that, I go into it just as hard, if not harder than something I do for myself. A lot of times, my guys will be like, Man, you gave that verse to that man, you could have did that on your own. So other artists always influence me. It always gives you a level of knowing where you’re at in the game when it comes [to] who you are able to work with.

ED: Out of all the songs you’ve recorded and all of the people you’ve worked with, what’s your favorite song and who’s your favorite artist to work with that was not a producer?

T: I don’t know if I can pick one. That’s a hard question.

ED: Who would you like to work with again?

T: Because you can feel the genius of Pharrell in the studio. I’ve worked with a lot of producers, but when I worked with him [it] was the first time I was like, Wow! He’s supposed to be what he is — where he’s at — because the energy just comes right off of him when he’s doing his thing. Like damn, right there he’s just making a hit. As soon as he says it, he just knows. It was just one of the most intriguing sessions I’ve had, so I’d want to go in with him.

ED: When did you figure out that rapping fast was the thing that you should do?

T: When people got excited. When I drew a lot of attention. I was a young cat. I had done all of the battle rap, slayed a bunch of people doing that, had all the metaphors, did all of that. So I wanted to switch it up and do something different.

ED: Who is your favorite artist from a genre of music other than rap?

T: Stephen Marley. I like rastafari and reggae music a lot. I like Red Dragon. I listen to Gnarls Barkley.

ED: What do you think about everything that is going on in the Midwest right now, in Chicago and in St. Louis?

T: I feel like we are subjected to a control system by the higher power that’s making us do things that we shouldn’t do. And we need to become more conscious of what’s going on, and realize that we gods and goddesses.

T: To keep doing what it’s doing, which is shitting on every other genre of music.

Emery Desper is a Seattle-based writer and regular contributor to 206UP. She Eats Books For Breakfast.