Hopeful rappers from The Six are at it again in 2012: swamping the 206UP.COM inbox with requests to be put on. The TrackMeet is here again to meet your needs. Dream big and win one of ’em and find everlasting esteem in the form of the next TrackMeet Mixtape (download last year’s version for free, here). Lose and suffer eternal tedium in nine-to-five purgatory until you die. Your future depends on this moment. No pressure. 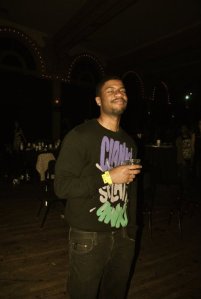 I just got hip to this free demo download from Dopkwe (the beat/rhyme combo of producer BeanOne and emcee Game Soulo). BeanOne is on his grind, as usual, concocting those left coast underground-flavored beats. And G-Soulo’s high-pitched flow goes nicely over said tracks.

I know Seattle doesn’t have a particular “sound” yet, but I hope that if and when it gets one, Bean’s name is mentioned in the conversation. His resume (Framework, Dyme Def, Choklate) is built solid like Qwest Field.

(Speaking of Frame, Hello World is also available via free download here. I had to scour the entirety of Capitol Hill one sunny day in ’05 to find a used copy of the CD. Too little, too late interwebs!)

Framework already said it on his classic debut, Hello World, but here I am saying it again to everyone in the 206 (and beyond) who just loves good hip-hop music.

First off, let me state that I am NOT a member of the local media. I don’t write for the Times, P.I., Stranger, Weekly, Seattle Sound, or any other publication out of the greater Puget Sound area. I AM JUST A FAN from the 206 (actually 360, originally) who appreciates good hip-hop music and who’s only desire is to share my thoughts with the reading public. (Ya’ll do still read, right? Like Geo said, “If you got time to take a sh*t, then you got time to read a book…” — or a blog!)

Secondly, I should also say that I have exactly ZERO personal relationships with any members of the professional Seattle hip-hop community. The extent of my relationship with Seattle emcees or producers goes as far as an occasional dap or a pound with a few favored artists outside of a venue. I don’t rap, I don’t produce, I don’t break. I don’t even put my lame-ass tag up on buildings with a black magic marker.

You may be asking yourself, how does this fool think he’s qualified to write about this sh*t then? Well, my friend, that’s the beauty of hip-hop culture. ANYone can participate. Folks like me who don’t have a musical bone in their body participate by listening and appreciating the message. You’ve seen it at shows. That dorky-looking white dude from Bellevue raising his fist in the front row at the Dyme Def concert? He’s participating. The dreadlocked homie from the Central bouncing his ass up and down at the Khingz show? He’s participating.

Hip-hop fans come in all shapes and sizes. The beauty lies in the fact that when a few thousand heads get to nodding to the beat, we are united in the rhythm. And when the music is turned down and people start talking, we have something to relate to. We might even learn a thing or two from each other.

That, my friends, is the power of hip-hop. This blog is my personal tribute to the culture and the spirit it creates. Enjoy!