(All photos are courtesy of Eleazar F. Teodoro, who was kind enough to allow me to post. Please check out his Flickr page, here.)

Two Friday nights ago at New York City’s Bowery Ballroom, a Seattle hip-hop lovefest went down. It was the final night of the Blue Scholars’ Cinemetropolis tour, the ninth day in a row of performances for road warriors Geo and Sabzi. Similar to the previous time they performed at this venue, there was a capacity crowd in attendance, at least half of which was made up of Seattle ex-pats like me, eager to turn the Lower East Side concert site into Manhattan’s own version of The Showbox (which it kind of is, anyway).

True to form, the duo put on a great set. They’ve developed and honed a live act that is second to none for Seattle hip-hop artists and, more importantly, on the strength of their personalities and music manage to capture the affinities of concert-goers not previously familiar with their material. I should know, I keep dragging my New York friends out to these shows and they invariably walk away shaking their heads at how good this Seattle rap sh-t is.

For me, though, the evening was all about seeing the Scholars’ supporting cast. Los Angeles underground rap soldier Bambu was the main guest star on the Cinemetropolis tour. Bam is a kindred spirit to the Blue Scholars’ ethos, an artist with much more on his mind than the music. Political ideals without forward momentum toward change may as well be inaction for these two acts whose social justice agenda plays at the forefront of their music. Consider also the numerous artistic collaborations over the years between Bam, Geo and Sabzi, and the team-up seemed even more like a natural occurrence.

Over the course of the 33 date tour, Team Scholars also invited various other guests with Pacific Northwest roots to the stage. At Bowery, Focused Noise’s recently NYC-relocated DJ Gen.Erik handled deck duties. Also in town were Grynch and Sol who played short sets.

And arriving in New York that very morning was The Physics crew (albeit one Monk Wordsmith short) who were there to rock for the very first time in the city. While Bambu gave the most riveting performance of the night, and Blue Scholars were clearly the seasoned veterans, it was Thig Natural, Justo, and Malice and Mario Sweet of The Physics, who had the most raw impact on the crowd. The quintet breezed through the title track from their outstanding sophomore album Love is a Business, took a musical trip south down the west edge of Lake Washington with “Coronas on Madrona,” and got all reminiscent on “Back Track” (where, it should be noted, Justo held down Language Arts’ verse with a lyrical dexterity not typically displayed by the group’s in-house producer). The Physics’ stage presentation was polished and professional. If they were nervous, it didn’t show. Before the group went on, I asked a preternaturally calm Thig Nat what they were going to do without his brother and fellow lyricist, Monk. “We’ll be okay. We’ll figure something out,” he said, cool as a Northwest Fall day.

The Physics were also the only SEA crew to specifically connect Seattle’s hip-hop roots to the very city that birthed the movement. Craig G, member of Marly Marl’s legendary Juice Crew, made a special appearance to spit his guest sixteen from The Physics’ new single, “The Recipe.” Craig explained briefly how he first became aware of this group from the Northwest corner of the map: a lady friend played some of their music for him one day and he commented to her on how “hard” it sounded.

Craig G’s presence felt like a real validation for this current generation of Seattle rap, a very small but significant piece of history for The Physics to take home with them as a reminder of how hip-hop succeeds in making this country (and the world) feel like a smaller place. The group finished off their set by re-introducing themselves by way of “Ready for We,” the “P-H-Y-S-I-C-S” refrain taking hold of the majority of the crowd. The Physics did exactly what they were supposed to do as opening acts: engage the audience and prime it for the headliners. Personally, I would have been fine if they’d stayed on for the rest of the night. 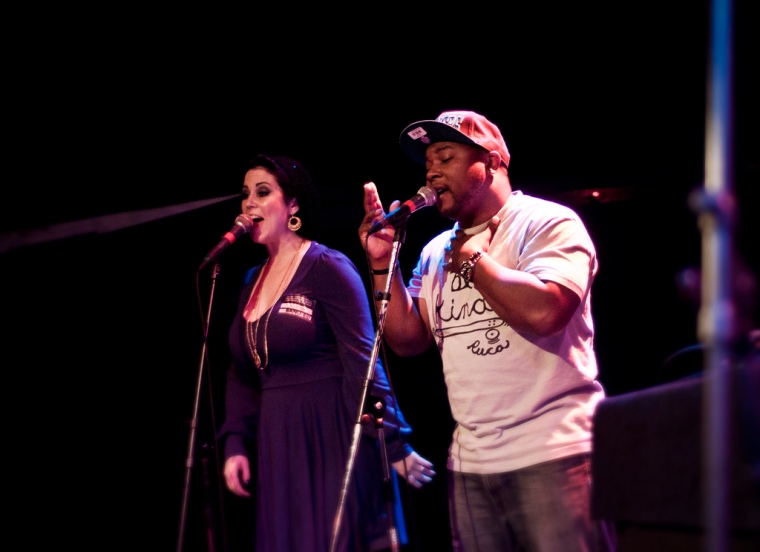 I’d been meaning to try and link up with The Physics since Love is a Business dropped, so when I received confirmation from Thig a few weeks back that they were indeed in the Bowery lineup, I asked him for an interview. He and Justo were gracious enough to abide. We met up downstairs in the bar about 30 minutes before wheels up.

When did you start working on Love is a Business? How long did it take start to finish?

Thig: We’ve been working on this album for like the last three years.

Justo: It was kind of an intermittent effort. Some of the songs are older than others, like a year and a half, two years old. And then toward the end, right when we were getting ready to release it, we recorded five songs within two months that [all] made it on the album.

What was the first song you completed for LIAB?

Thig: “Coronas on Madrona” I actually wrote in college.

I’ve noticed that your musical output is much lighter compared to other Seattle acts. Do you guys intentionally curate the music you release more intensely?

Justo: We definitely try to be selective with what we put out. We believe quality is the most important thing in our music. And being that we have limited time, that results in us [releasing less]. We have really busy personal lives, so we don’t get in [the studio] as much as we’d like to. Hopefully that will change if we can get to the point where we just do music. That’s our goal, and then we can release more stuff. We’ve actually been recording a lot lately so the next project should come out fairly soon.

And what’s that project?

Thig: We’ve got two projects coming up. One is called Digital Wildlife. It’s more of an experimental project mixing together hip-hop, R&B and electro. We released a song earlier this year called “Fix You” that is in the vein of Digital Wildlife. We’re still working on that, we want to perfect it and make sure that it’s dope before we release it. And we’re also working on the next full-length hip-hop project which we’re going to release this summer. We definitely recognize the need to give people what they want more frequently so we’ll definitely do [more music] on a yearly basis.

With Digital Wildlife, did that concept come about because of all the current mashing-up of genres going on in music these days?

Thig: I feel like it was organic. When we’re in the studio, you know, we vibe out to beats. And certain beats make you wanna sing as opposed to rap. So we have a lot of songs that are sort of like that. We decided to put them together as one cohesive project.

You guys referenced your nine-to-five jobs. Love is a Business deals heavily in very relatable, everyday issues like relationships and work. How would you say your nine-to-five hustles inform your musical lives and vice versa?

Justo: We’ve been a group since like ‘97, and we didn’t release stuff to the public but we were always making music. It’s always had that personal touch, where we drew off our personal lives and spoke about that in the music. And now that we have these full time careers it’s just natural that we inject that into the music. We don’t play characters in this, we play ourselves and that’s what we’re doing. If we were just doing music for a living, the content [would] change.

How is Love is a Business being received outside of Seattle?

Thig: It’s been received really well. We’ve been going on this tour with Blue Scholars and people are really feeling the music. Even the more Seattle-centric songs. A couple people came up to me at the San Diego show and were like, “Man I was really feeling that song, it almost makes me wanna be from Seattle.” So I think people appreciate the love that we have for our town. And we’ve also been getting a lot of hits and purchases from around the world, like Germany, Africa, France, and other parts of Europe.

I think Love is a Business is a fully-conceived, mature album. It sounds like a record that a group might make three or four albums deep into their career. Thinking about where you guys are at in your lives, I think if and when The Physics blow up, it will be in a different way than a lot of these younger acts currently doing it, and it will be to a different type of audience. Does that sound accurate? Could you guys see yourselves somehow having to compromise your artistry for greater success?

Justo: We’re definitely gonna evolve. We’re always trying to get better and try different things. Hopefully we’re all gonna grow together and the people who listened to the same stuff we grew up listening to will be looking for new stuff. We’re from that era when downloading wasn’t as popular as it is with the current generation. Hopefully we can gain that crowd. As far as Love is a Business being a planned-out thing, we came up with the title [of the album] before we did like ninety percent of the songs on there. Especially with Thig and his content matter, he was trying to weave in different themes that had to do with love and business and how they interact.

How did the Phonte collaboration come about?

Thig: We opened for Little Brother in 2008. After the show we exchanged contact info and kept in touch over time. We hollered at him for LIAB and just made it happen.

Justo: I literally put his verse to about 25 different beats, so it went through its own evolution. As soon as we found the [final] beat, Thig wrote his verse.

Thig: I just listened to the new Drake album, but I definitely skipped a couple songs on there. Kendrick Lamar’s Section.80 was actually the last one I listened to.